Thanks for the support—we appreciate it a great deal!

I just got back from LA where I was on the Joe Rogan Experience.  Joe hosts one of the most popular podcasts in America.  We landed in LA on Monday and went to his studio on Tuesday.

Joe’s studio is very impressive.  It has a full gym, a flotation sensory deprivation tank, a couple of cars, a life-size werewolf, a mixed martial arts facility, and tons of art and memorabilia.  I called it a “man-hangar.” 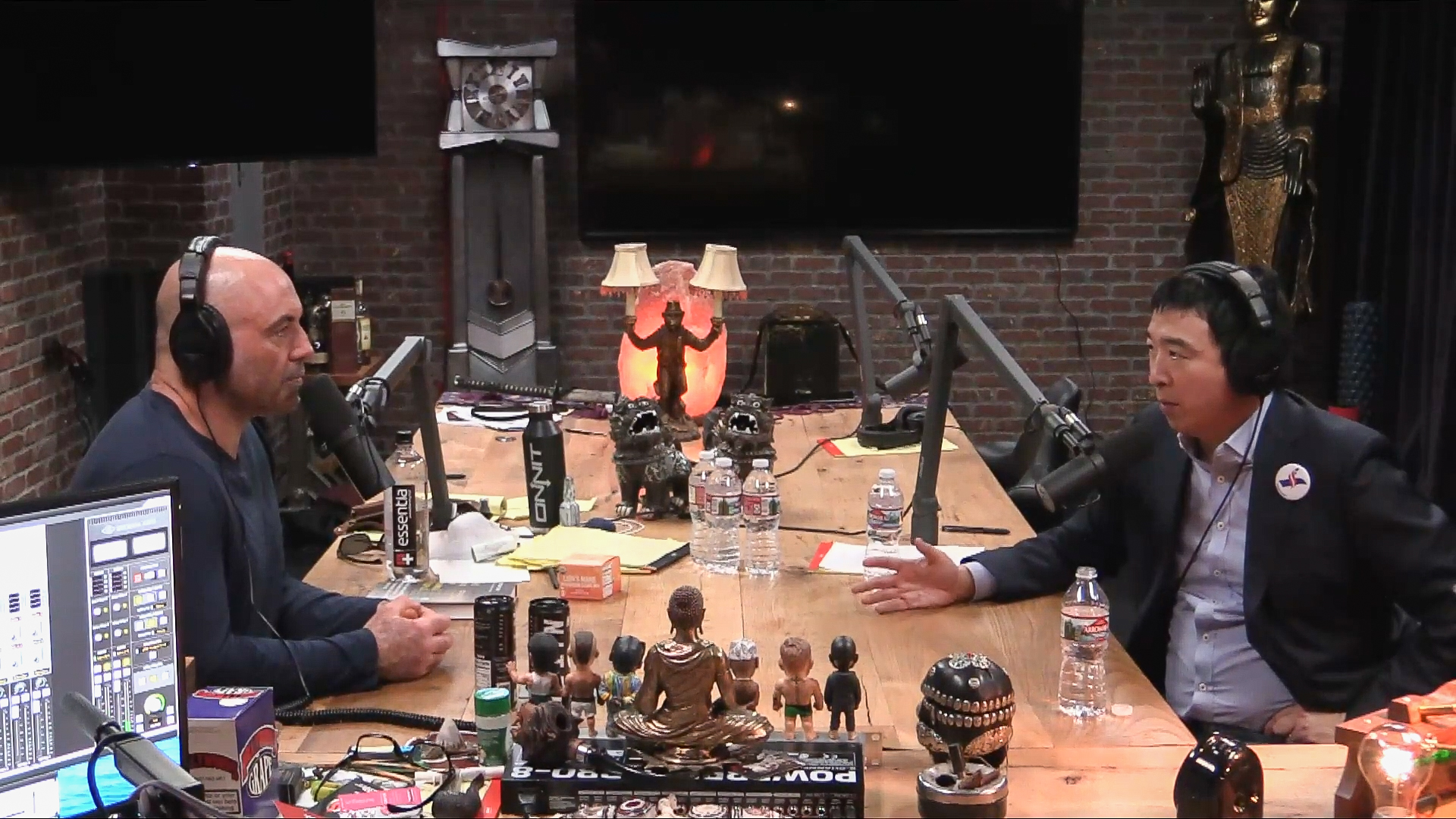 Joe and I sat down for a nearly two-hour conversation.  We discussed many of the main ideas of the campaign, including automation’s effect on the economy and Universal Basic Income.  You can see the whole thing here.  At the end, it was hard to believe that it had been almost two hours.  Afterwards, he said to me, “You could go really far because you don’t seem like a politician.” 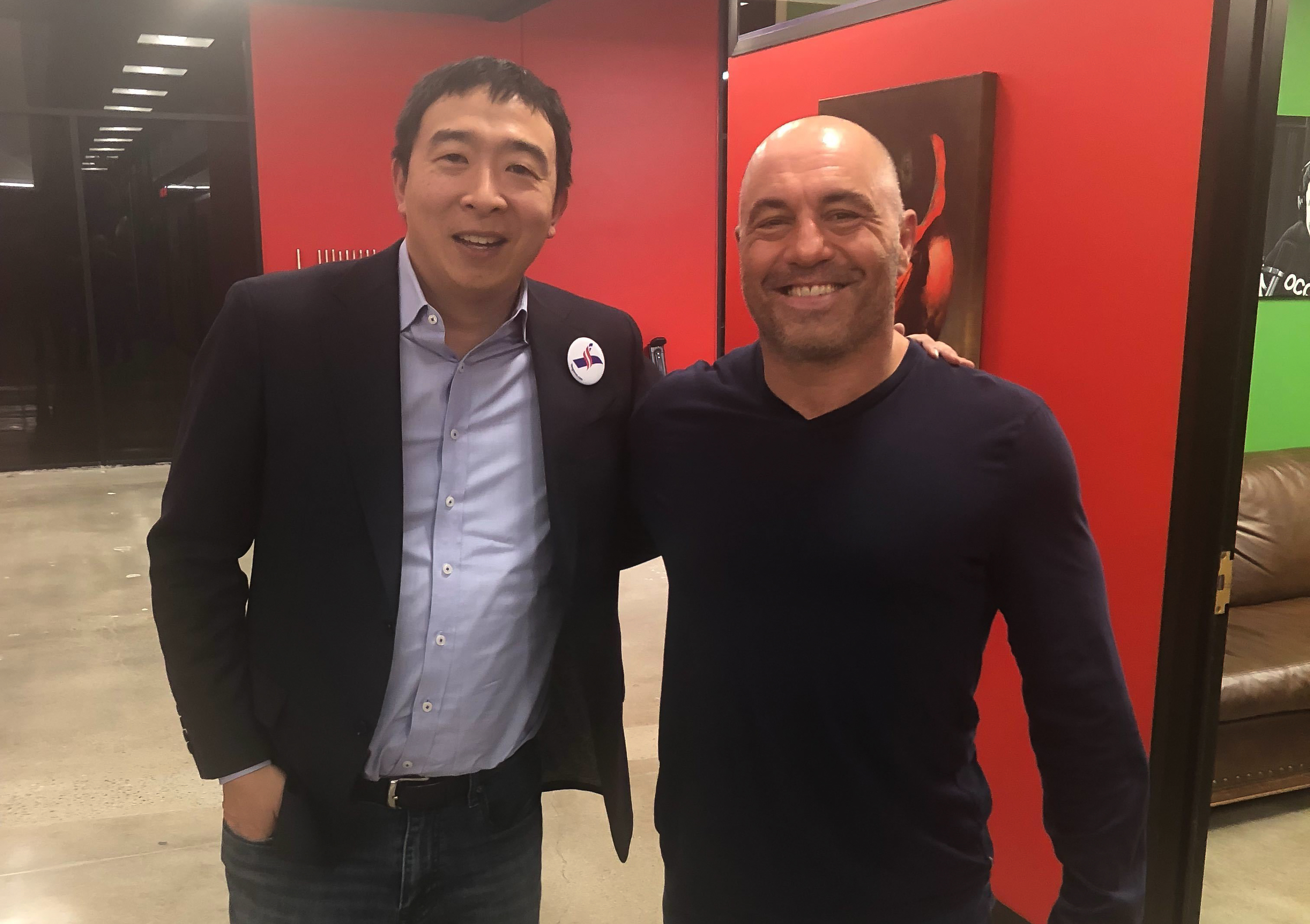 Since then, our conversation has already been viewed almost one million times on YouTube.  We’ve gotten thousands of new supporters and received tens of thousands in new donations.  One friend of mine joked that there will be a “BR (Before Rogan)” and “AR (After Rogan)” phase of the campaign.  He’s likely right.

It’s not just Joe.  Time, CBS, and Fox all ran stories on the campaign this past week.  The Daily Show segment and an Esquire profile are upcoming, and I’m scheduled to appear on Neil Cavuto’s Fox News show this Friday at 4 p.m.  We have another half-dozen press requests on the way as well.

People are waking up to this campaign in a big way.  We are only going to grow from here.  Thank you for making it possible.

Wednesday morning, something unusual happened to me that I think is relevant.  I was standing on the curb in Santa Monica, waiting for my car to the airport.  Suddenly, a homeless guy in his mid-50s ran across the street full speed and shoved me. He yelled, “Don’t you say that to me!” I was obviously startled.  By the time I reacted, he had run back across the street yelling.  People on the other sidewalk were giving him a wide berth.  Those on my side of the street looked at me, and I gave them a thumbs up to indicate I was okay.

My car got there a minute later and I got in.  I reflected on the homeless guy in LA—he seemed like he had mental health problems.  What could be done to help him?

One of the things my wife loves about Universal Basic Income is that it would create an incentive to help the indigent.  Everyone becomes a potential dividend recipient—so an organization that helps a homeless man get back on his feet would have an economic incentive to do so.  Though we all have intrinsic worth as human beings, you know that orgs and businesses would react differently if each person had $1,000 a month in income coming to them.

The Freedom Dividend wouldn’t solve everything of course—the guy who shoved me would still have problems.  The human condition is not easy.  But $1,000/month might make things a little easier for all of us, and make it a little easier for those who want to help others.  It might help keep more of us functional.

I have a couple days in New York with my family before heading to Washington, D.C., this weekend for some meetings and press.  We’re holding a public rally in Baltimore on Monday and speaking at Georgetown University on Tuesday.  Our path ahead just gets better and better.

I’d been looking forward to sitting down with Joe for quite some time.  I’m happy to say the experience was even better than I’d hoped.  It felt like history in the making.