Like all of you, I was devastated by the events at the Tree of Life synagogue in Pittsburgh this weekend.  It is heartbreaking that so many innocent lives were brutally taken in a place of worship and peace.

I feel particularly terrible and terrified for my Jewish friends.  So many have lost family members to violence and anti-Semitism across the years.  This weekend, their worst fears were realized here and now.  It is truly a nightmare come to life in America.

Unfortunately, the shooter represents a larger trend. The shooter used a far-right alternative to Twitter that has 635,000 subscribers, up 50% from March of this year.  Anti-Semitic incidents were up 60% in 2017.  The bombs mailed to Democratic leaders this past week were born of a similar sense of hatred.  America is heading toward a dangerous spiral of political and ethnically charged violence as our institutional failure continues.

There will be more random mass shootings in the months ahead as middle-aged white men self-destruct and feel that life has no meaning.  As the mindset of scarcity spreads and deepens, people’s executive functioning will erode. Contributing to the discord will be a climate that equates opposing ideas or speech to violence and hate.  Anti-Semitic violence [will] break out… there are approximately 270 to 310 million firearms in the United States, almost one per human being.  We are the most heavily armed society in the history of mankind.  Disintegration is unlikely to be gentle.

Hateful rhetoric and the advent of Donald Trump have made things worse.  But after he is gone the hatred will not fade like a fever dream. It will be with us for years to come – and is likely to deepen, driven by increased economic stresses, changing demographics, and the ongoing disintegration of institutional authority. 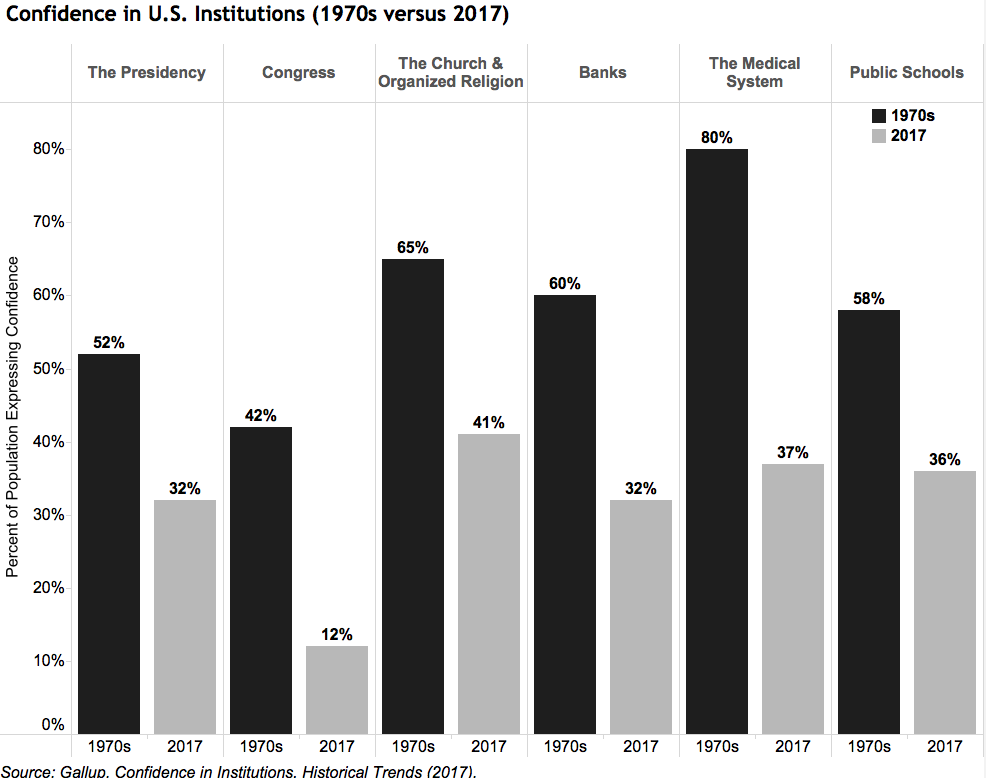 We are heading in the wrong direction.  We need to think much bigger about how we can turn back the hate and improve our society.

Most politicians talk about how we need to love and understand each other and treat each other with respect.  Improved rhetoric and norms would help.  I confess though – I find this approach to be frustratingly vapid and ineffective even though I know it is part of the solution.

In practical terms, it is extraordinarily difficult to secure civilian locations and places of worship against armed attack.  It would require ubiquitous trained armed guards in a way that would transform the country and be extremely costly, and even then it wouldn’t work.  The Pittsburgh shooter wounded 3 highly trained police officers during his attack, for example.

It is more realistic, though still difficult, to make guns harder to get.  We should do everything in our power:

Even here, though, these measures would not prevent anti-Semitic and racially motivated violence from rising in the years ahead.  America is set to become majority minority by 2045.  This will be a truly dangerous time as we are currently automating away the most common middle-class jobs, which will lead to economic stress, social polarization, anger, and violence. It’s already begun.

To me, the biggest, most positive move we can make is to replace the sense of scarcity with a sense of abundance and pass a Freedom Dividend of $1,000/month per adult.  This would alleviate stress levels, improve mental health, and decrease economic and social tensions.  It would give everyone a sense of security.

If you’re walking around worried about how to survive month-to-month you are more likely to lash out and respond to hateful messages and ideas.  We need to get people thinking about the future knowing that their place in it is assured.

Would a Universal Basic Income have prevented the violence in Pittsburgh?  Perhaps not – but I believe it would have a better chance of preventing the next one than just about anything else we could do.  And yes, that includes thoughts and prayers.

My greatest fear is that we slump into a world where the occasional shooting – even one as horrific as what happened in Pittsburgh – becomes something we become accustomed to.  We adapt to it.  That cannot be allowed to happen.  We must translate heartbreak into action.  We owe it to ourselves, our children, our fellow citizens, and the victims of the Tree of Life synagogue, Parkland, Sandy Hook, and every other recent massacre to overcome the gun lobby and get this right.

Let’s fight for a future where Americans can pray without fear, and gather in peace.  It will require redefining our society in the ways that matter.  The challenge is historic and our solutions should be the same.