Hello everyone—I hope you had a wonderful weekend watching the nefarious Patriots win the Superbowl with friends and family.

I spent Sunday afternoon in Raleigh, North Carolina, with the College Democrats of America.  I had the chance to address some of the most passionate college activists in the country.  It was a great opportunity and the campaign got some new fans.

I arrived in North Carolina straight from campaigning in Iowa.  I spent part of Saturday with the owner of a small trucking company—Dennis Bogaski—and learned a lot about him and the other 3.5 million truckers around the country.

Dennis and I met at a truck stop in Altoona, Iowa, on Saturday afternoon.  I wanted to see how truckers live and work.  This truck stop had a shower, laundry, and several TV lounges for the truckers to use in addition to a giant garage for repairs.  I asked if there were beds but it turns out just about every trucker sleeps in his truck.  The bigger truck stops have movie theaters, doctors, dentists, and sit-down restaurants.  The biggest truck stop—Iowa 80 in nearby Davenport, Iowa—gets 5,000 visitors a day.

I rode with Dennis from Altoona to Grinnell, Iowa. Dennis is 49 years old and from Scranton, Pennsylvania.  He served in the US Marine Corps in his twenties before picking up truck driving.  He moved to Iowa 9 years ago because it was a better trucking hub with better routes.  He dated someone seriously recently but is now single and doesn’t have kids. 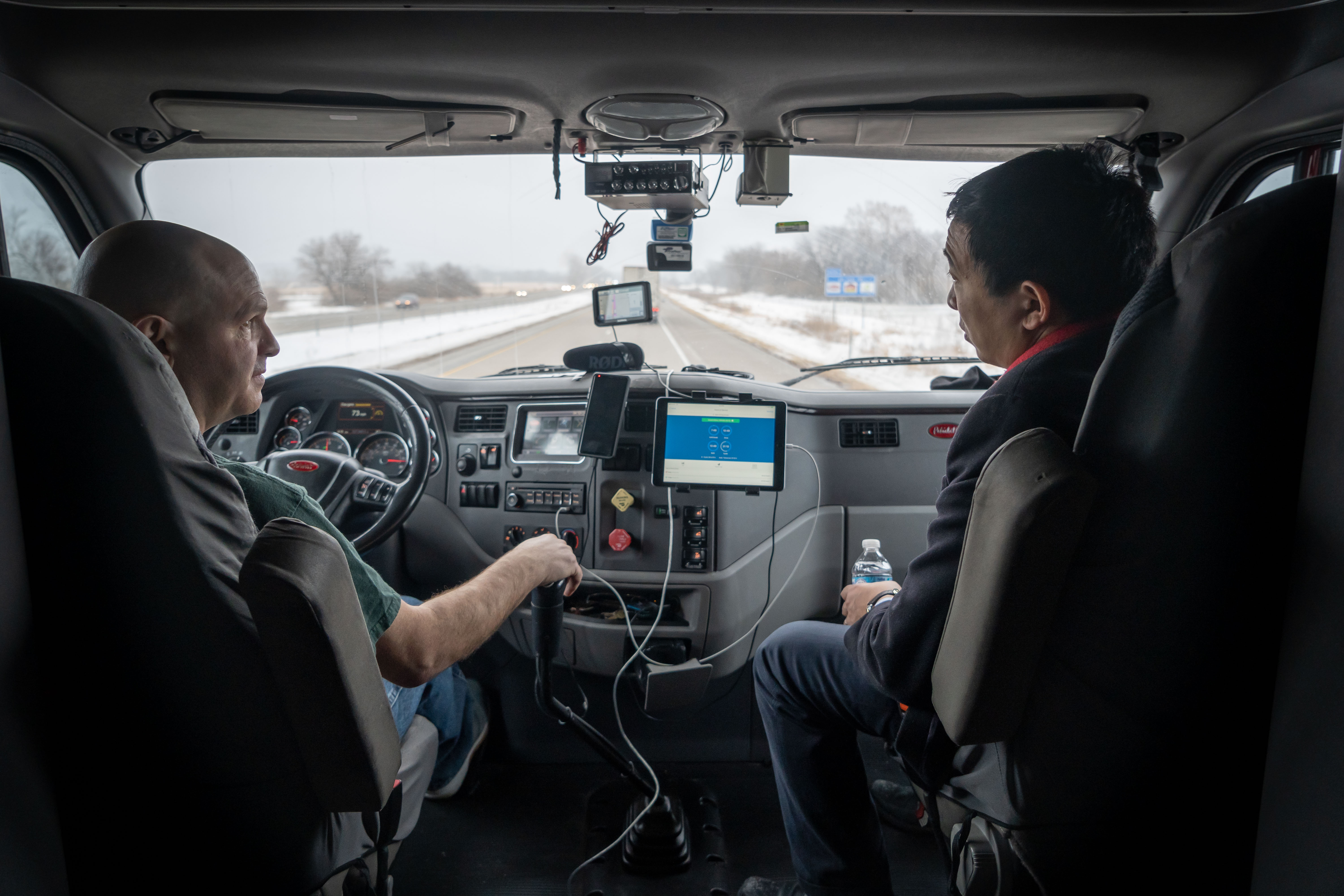 His schedule is brutal.  14 hours a day on the road with a max of 70 hours every 8 days.  The 10 “rest” hours are spent sleeping and often cleaning and maintaining the truck.  Many truckers spend weeks away from their families at a time and then get 3 or 4 days off before hitting the road again.  Worse yet, trucking companies often route truckers such that their route doesn’t end close to home—they might have to spend their days off across the country or somehow get home on their own dime.

I asked if it was social on the road, whether there was any camaraderie with other truckers.  He said not really.

“Trucking has gotten harder and harder.  New drivers come and go and no one cares.  You’re not a person, you’re just a butt in a seat.”

His biggest complaint is that his truck is electronically monitored to comply with government time use regulations that were implemented about 8 years ago.  “As soon as my truck moves, the 14 hour timer starts.  Doesn’t matter if I want to take a nap sometime in there.  After 14 hours, the computer starts beeping and flashing that I’m in violation.  Then I don’t have a choice but to stop.  Even if I just have to go 5 more miles to another truck stop, I don’t have a choice.”

I asked him if he’d seen the YouTube videos and projections about robot trucks.  He said, “There is no way a computer could do this job.  I’m sometimes carrying 40 tons.  It takes me six seconds to stop.  You think you’d put a computer in charge of this?  No way that would work in an urban area where there are a lot of passenger cars.”

I asked him if he thought it would be possible for a computer to do the interstate driving, and then have a driver like him take over when it got off the highway.  He paused and thought about it for a second.  Then he said, “Well, there will still be a need for a driver at the end.  If a robot wants to drive it cross-country, be my guest.  I’d be on the road less.  But there will always be a job for me.”

We eventually arrived in Grinnell, Iowa.  We shook hands as we said goodbye.  Dennis said, “I voted for Donald Trump because I don’t think Democrats care about people like me.  They scare me.  You talk like a business guy.  The fact that you’re here spending time with me says a lot.  I’m going to keep up with you and tell my friends about you.”  I thanked him for that.  I learned a lot more from Dennis than he did from me. 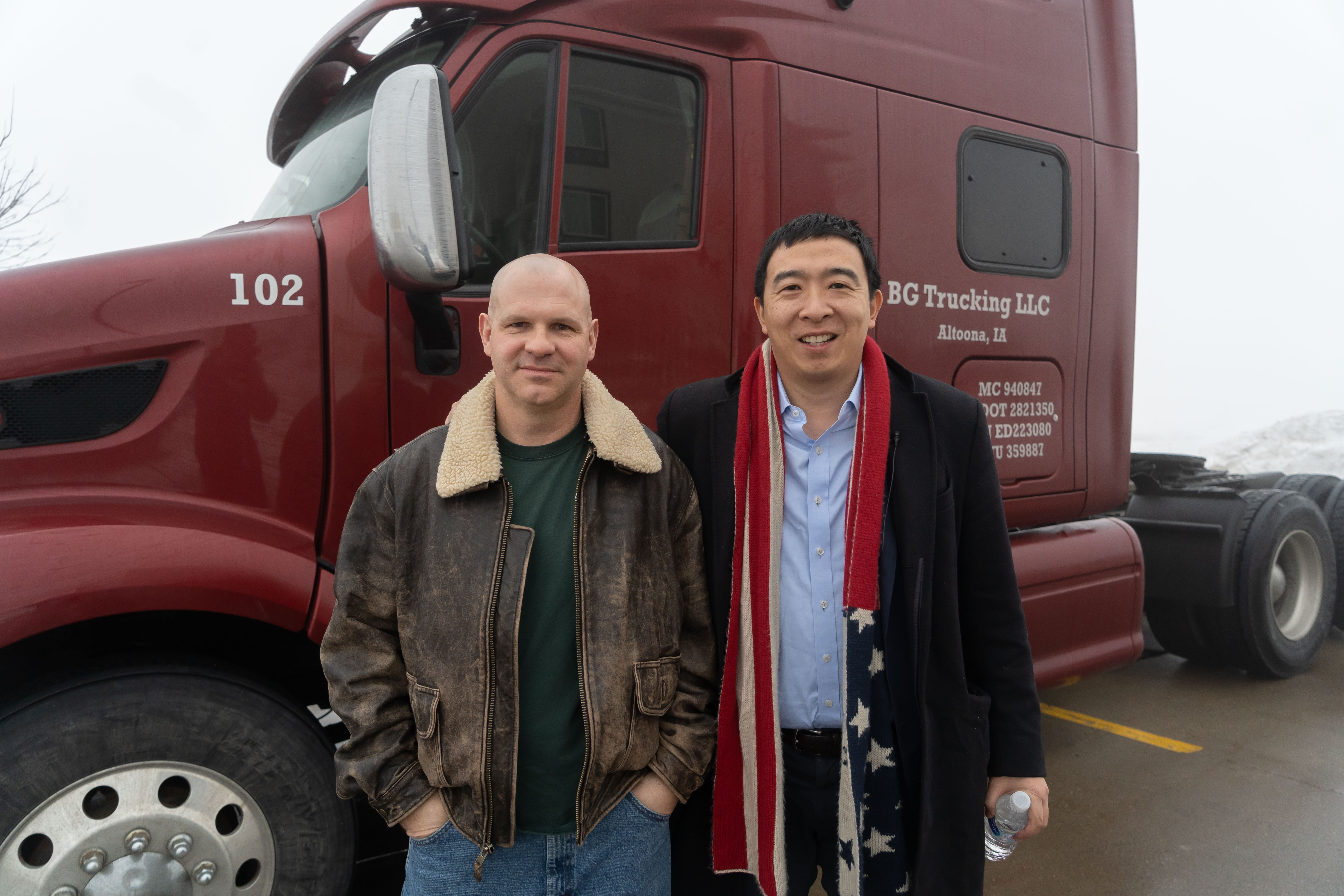 Spending time with Dennis was no accident.  I am very concerned about truckers.  The cost savings associated with automating away their jobs are estimated to be $168 billion per year in saved labor costs, fuel efficiency, equipment utilization, and accident avoidance.  That is an enormous financial incentive, and it could even save lives—about 4,000 people die in accidents with trucks every year.  Robot trucks could be on the road in 5–10 years.  Amazon is testing them right now in the Midwest.

These are some of the most important questions of our time.  Answering them is a fundamental responsibility of a functioning government.  Unfortunately, our leadership is asleep at the switch.  It’s time to wake them up or provide new leadership.

Today, I am filming a Daily Show segment in New York at our HQ.  Then I head up to New Hampshire for a multi-day tour to campaign across the state all week.  I’ll be speaking at my alma mater, Phillips Exeter, on Friday, with a couple events in Boston.  Then it’s off to Los Angeles, where I’ll be on Joe Rogan’s podcast next Tuesday.  I’ve been traveling a lot on this campaign, but I can honestly say it’s nothing compared to what Dennis and others experience every week on the road.

Let’s answer the right questions and solve the real problems.  We have a lot of work to do.