Hello all and thank you for your support!  I hope you had a wonderful holiday weekend.

It’s been a busy week in the press for our campaign.  In addition to the recent Politico profile and CNN putting me in its top 10, TIME did a profile on my campaign, and VICE News also did a story on me, which you can watch on HBO.  It’s a great reason to keep your subscription post-Game of Thrones. 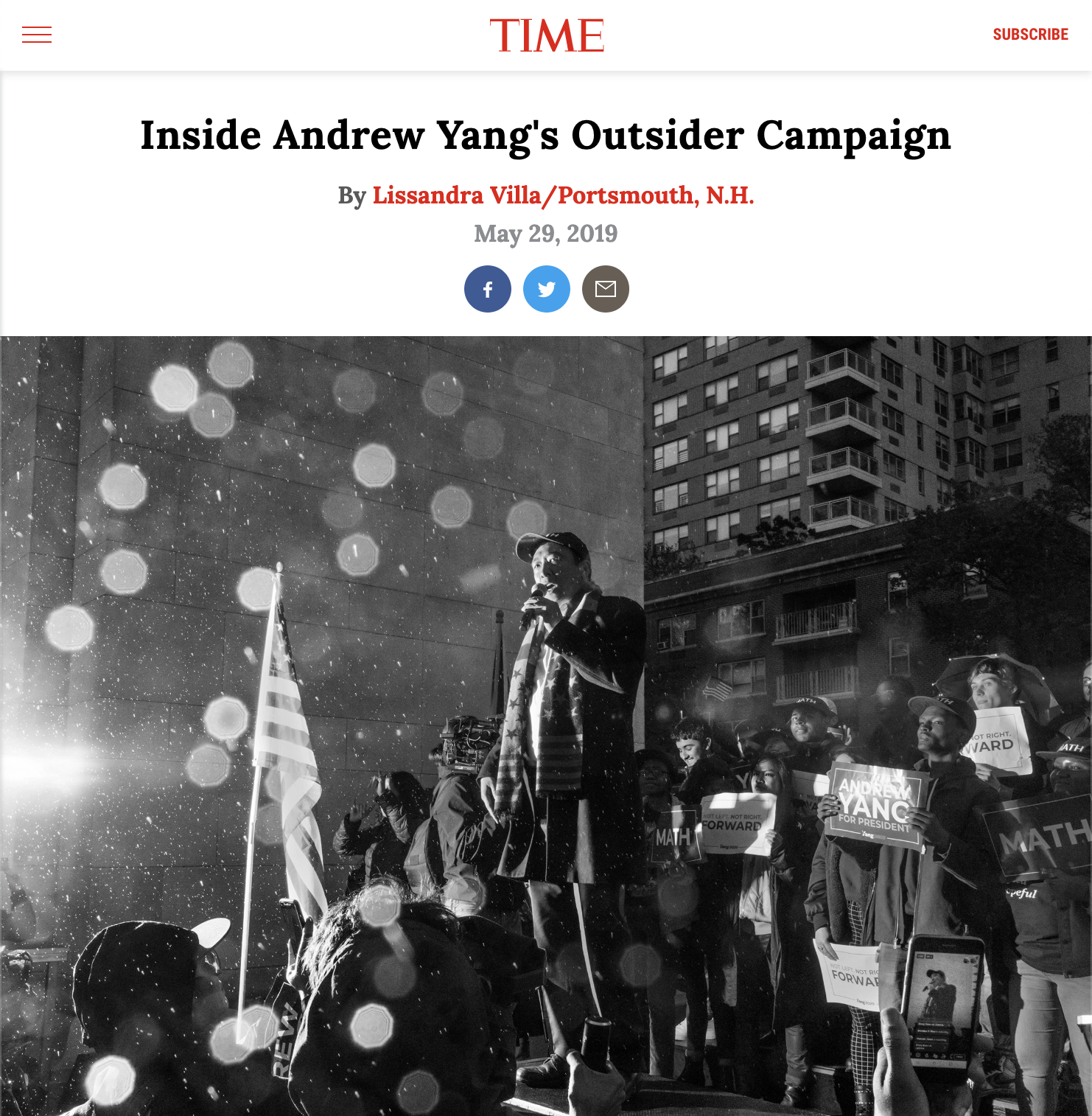 I wanted to share a story with you from a supporter.  I believe it is stories like this one that are the reason we are seeing our campaign grow at such a rapid pace:

I am 51 years old and have never voted. Me and my husband only receive $520 each per month on SSI and only $89 in SNAP. We have two twin sons that live with us. We recently moved into a home that was rented to us by someone who didn’t own the property. Now we are being forced out on the streets by the owner. But I am a fighter and will continue to do what I need for my family, I never met any candidate that was as honest and caring for people as I have seen in Andrew Yang and know from the bottom of my heart that he is the one that we need as President. We may not have much, but I try to donate as much as I can to help get him in the office. I know that Yang is our only hope for our future. I have committed myself to do whatever I can to get Andrew Yang to be our next President.

This campaign is doing so well because we are the only campaign talking about the big problems facing us as our economy transforms underneath our feet.  We are talking about a future where families do not have to feel stuck in place or hopeless.  They do not have to live with an economic boot on their necks.

Our success is also because we are powered by YOU—our average donation is only around $22 per person.  We don’t take any corporate PAC money.

We are slowly moving up in the polls and name recognition but we still have a long way to go.

Make a $5 contribution today and not only can we compete in states like Iowa, New Hampshire, and South Carolina, but we can take our message all the way to Washington when we win this entire election.

While other politicians in the field are offering 20th century solutions to 21st century problems, we know the reality.  Automation is threatening over 20-30% of all American jobs in the next 11 years, and 90%+ of jobs created in the past decade are temporary, gig, or contract jobs, with no benefits or security.  Our government is dangerously behind the curve at dealing with emerging technologies and their impact on our way of life.

We are taking a bold and innovative approach to the way we want to fix the problems facing this country, and I could not be more proud of the way we are doing it.

I have another story I want you to read—because it is the future of many American workers whether they realize it yet or not:

I’m a college educated, 40+, single, underpaid admin worker living in Seattle. My skill set will eventually become automated, and I have no real means or desire to get a graduate degree at this point to compete with younger generations, and I don’t want the debt of school weighing on me. I see the donations as an investment in my future; it feels pretty bleak otherwise. As someone who feels largely ignored by other candidates, I’m supporting Andrew Yang, whose Freedom Dividend will help everyone.

When we started this race, we were called a ‘longer-than-long-shot’ campaign.  Well, this longer-than-long-shot has qualified for the first Democratic debates in June and July and is on pace to qualify for the Fall debates while sitting Representatives and Senators are still struggling to find their place on stage.

With your help, we can make the case for a new vision for our country and take it all the way to the White House in 2020.