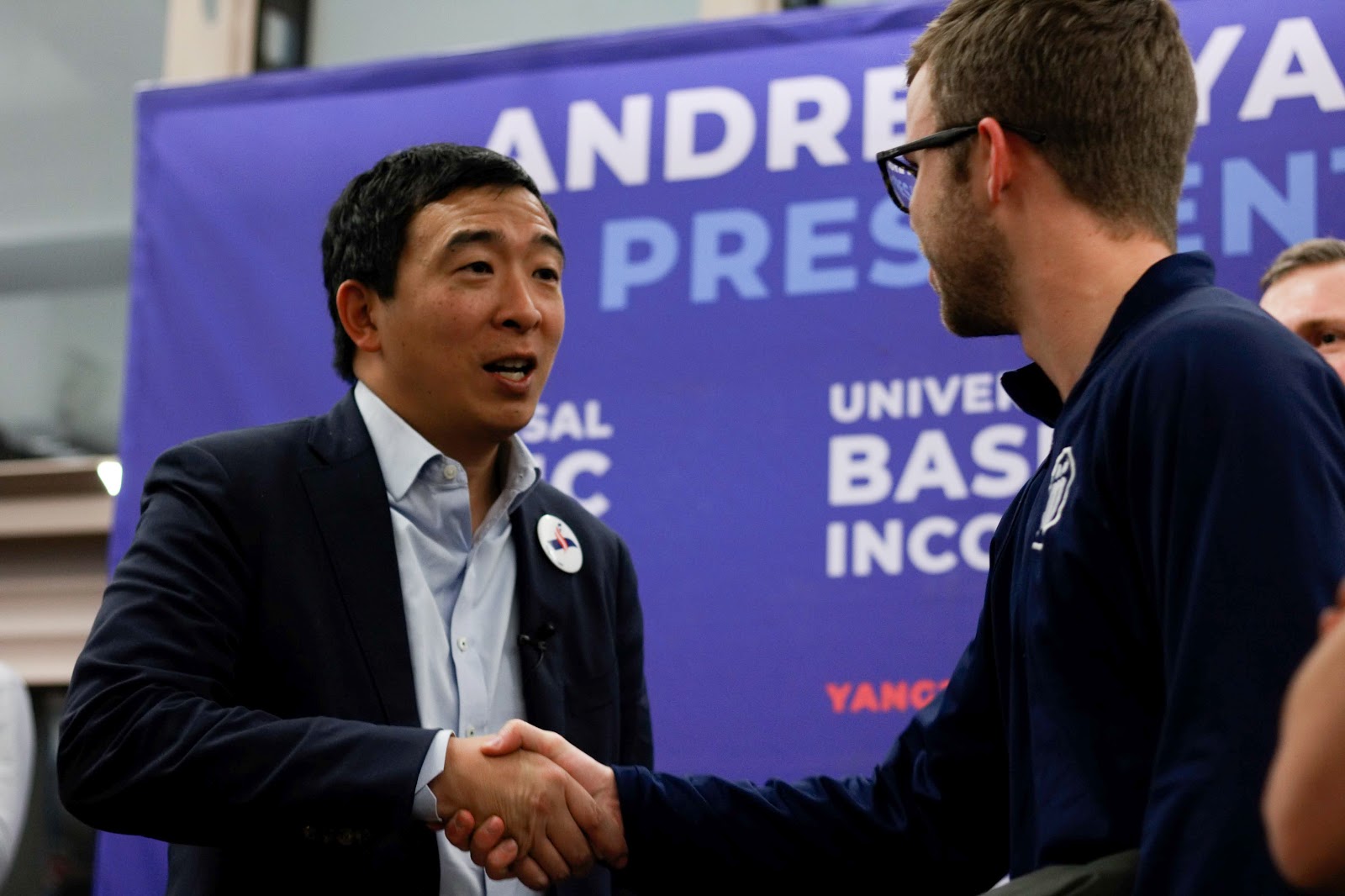 Speaking at his alma mater, Phillips Exeter Academy, Presidential Candidate Yang discusses his time in high school, how the school helped his career as an entrepreneur, and how he made the decision to run for President.

Exeter, New Hampshire; February 8th, 2019: Presidential Candidate Andrew Yang will deliver a keynote address to the student body of his alma mater, Phillips Exeter Academy, today at 9:50 AM EST. He will also take questions about his presidential run, the future of work and his plan for a Universal Basic Income of $1,000 per month for all American adults.

The full text of his formal speech can be found below.

Hello everyone.  It’s a privilege and an honor to be back here at Phillips Exeter.  This place shaped me in fundamental ways.  I learned so much here.  I can honestly say I would never be running for President if not for my time at Exeter.

That said, I didn’t really enjoy my time here.  This is my first time back in 27 years.

Most of that was on me.  I arrived here as an Upper and you all know that’s a difficult transition.  I didn’t really fit in.  There was, however, something here that may still be true today.  This place was very competitive.  And we somehow knew things about each other that we’re going to determine where we went to school. “This kid has quadruple legacy to Harvard.  That guy’s family literally built Brown University. That guy has a set of restaurant guides named after his family.  That guy was going to get an athletic scholarship to Yale.”  The subtext was always that our value and stature was going to be determined by where we got into college.

I did well here.  I got into Stanford and Brown and decided to go to Brown. That too was a minor source of controversy.  People here were like, “Stanford is better than Brown.  Why would you go to Brown?”  I visited Stanford and thought it was too nice a place to go to school. Their acceptance brochure had been a picture of a football crowd saying “Yes Stanford!” and I didn’t like football. But I mainly went to Brown because my brother was going to school nearby at Wesleyan.

Brown allowed me to grow up. I felt things very strongly throughout my adolescence, probably one reason I didn’t enjoy it here.  I had a serious college relationship that, when it ended I took it hard.  But it helped me mature.  I was pretty depressed and Brown let me get away with that.

After Brown, I still didn’t know what to do.  So I went to law school.  I spent 5 months as an unhappy lawyer at Davis Polk.  And I said, this is a terrible job.  My quote at the time was, “This firm is like a temple to the squandering of human potential.”  So I quit and started a dot-com.

I’m now thought of as a successful entrepreneur.  Some of you read my book ‘Smart People Should Build Things.’  And I’m going to share the secret to entrepreneurship:

Tell everyone you know that you’re going to do something.   That way, you don’t have a choice but to do it.

I started Stargiving.com, but it unfortunately flopped.  Everyone I knew was aware that I had failed.  That hurt too.  I worked at another startup that ran out of money and then a healthcare software company. I spent my twenties working at startups that didn’t work out.

Meanwhile, most of my friends at Exeter were bankers, consultants, and lawyers living in very nice apartments in Manhattan.  I was living with a roommate, teaching classes and throwing parties on the side. It was hard to stay positive.

During this time, a friend from Exeter, Fiona Smith, called me up and asked me if I would meet with a friend of hers.  That meeting changed my life.

Her friend, Zeke had started an education company, Manhattan Prep, and asked if I could help.  I later became CEO of that company when I was 31 and Zeke stepped away.  The company eventually became number one in the country and was acquired by the Washington Post in 2009.

This is one reason why I know that Exeter shaped my career.  If Fiona hadn’t introduced me to Zeke, I never would have wound up running that company.

I was still haunted by the sense that we had so many of our talented people doing one of six things in six places:  finance, consulting, tech, law, medicine or academia in New York, San Francisco, Boston, Chicago, DC or LA.  This was true of most of my friends at Exeter.

Now, you can’t be negative about something without offering a solution.  I thought about what I believed more people like you should be doing 5 or 6 years from now.  And I thought you should be starting businesses in places that need it – places like Detroit, New Orleans, Baltimore, or Birmingham.  We needed to create a path for people to do that.

So I quit my job and started Venture for America.  I donated $120k and started calling rich friends and asked them, “Do you love America.”  Classmates from Exeter helped.  Another Exonian introduced me to a Foundation that became one of our first funders.

This place is a magical, wonderful, difficult place to come of age.  You are around people constantly, yet it is easy to feel alone.  You are among the most successful high school students in the country, yet you feel your success to be challenged at all times. You are taught to do good in the world, yet it is your own success that remains the way that you are judged.

In my experience, if you want a career you will be proud of, you are going to have to fight for it.  The market will not help you.  Instead, the market will drive you to do certain things that may or may not be what you’d imagined.  And here in America in 2019, the market is the most powerful force in our society.

Venture for America has a credo, that I hope some of you find useful.  I confess that this place very much influenced it.  It is:

“My career is a choice that indicates my values. There is no courage without risk. I believe that actions are the proper measure of one’s accomplishments. I will create value for myself and others. I will act with integrity in all things.

Thank you, students of Phillips Exeter.  You will shape the future of this country.  Use your power wisely.

One of the most exciting and unique candidates to enter the 2020 US Presidential Race, Andrew Yang is a New York and Silicon Valley entrepreneur running as a Democrat.

In 2011, he founded Venture for America, a national public service fellowship that places recent grads in struggling communities to help local businesses revitalize the economy. Over 6 years running the organization, Andrew helped to create more than 2,500 jobs in cities like Cleveland, Detroit, and Pittsburgh. His work at VFA saw him recognized by the Obama White House as a 2012 Champion of Change and a 2015 Presidential Ambassador for Global Entrepreneurship.

When Andrew realized that artificial intelligence and other automation technologies threatened to eliminate one-third of all American jobs and current politicians weren’t even recognizing the problem, he knew the nation needed a leader with a vision on how to enter this radically different future.

Andrew’s innovative platform focuses on solutions to problems being faced by normal Americans, including the implementation of the Freedom Dividend: $1,000 a month for American adults, no strings attached. See his features in the New York Times CNBC, and Rolling Stone, his keynote speech at Progress Iowa; his podcasts with Freakonomics and Sam Harris; and his campaign video.

Universal Basic Income (UBI) guarantees a certain minimum income to every citizen within a given governed population, without having to pass a test or fulfill a work requirement.

Andrew Yang’s Freedom Dividend is a universal basic income set at $1,000 per month, or $12,000 per year, for all U.S. citizens over the age of 18, paid for by a new tax on automation. Yes, that means you and everyone you know would get another $1,000/month every month from the U.S. government, no questions asked. You could use that money to pay down debt, start a business, go back to school, or shop at local boutiques. For more information, visit our campaign’s UBI explainer.